I am also the co-organizer for the second annual Global March for Elephants and Rhinos on October 3rd, 2015. I am grateful for my co-organizers Fran, Andrea, Jake and Christine at Elephanatics who have jumped into the madness with me along with the growing number of incredible volunteers, not the least of whom is Dave who works tirelessly for animals.

Please find a city near you or better yet organize a march in your city! Without our help, without a global effort these two species face extinction.

You can find out more about the Global March for Elephants and Rhinos right here. Find your city and join the many others who are lending their time and effort to speak up on their behalf.

Here are some pictures from last year’s march.

The Vancouver march will be held at the Vancouver Public Library North Plaza from 12:00 pm to 2:00 om Saturday October 3rd. Join us.  These guys need all the help they can get. We’ll have music, speakers, face painters, cool stuff for sale and of course we’ll sign petitions and make as much noise as we can so the world hears and responds to this urgent issue. 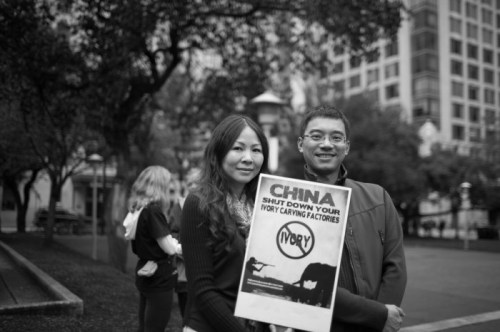 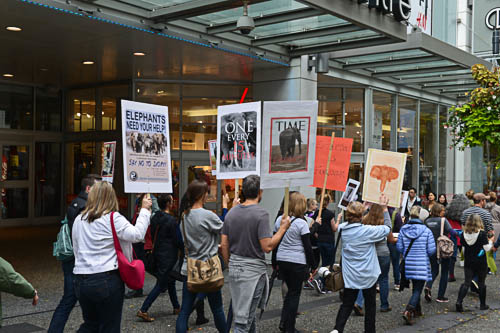 I am proud to have been a part of this amazing, grassroots event that took place October 4th in 136 cities around the world where people all marched to end the ivory and rhino horn trades that threaten these species. Here are a few pictures from the Vancouver event: 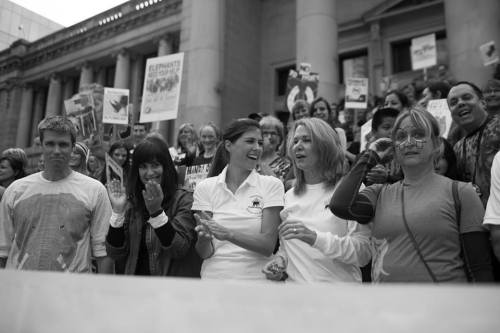 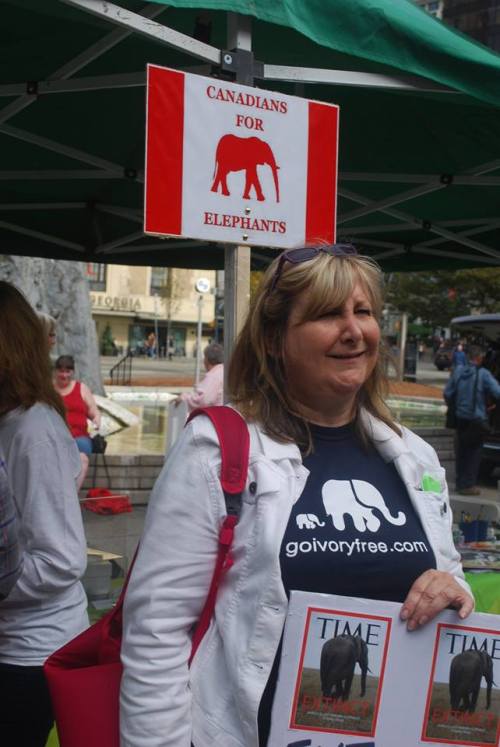 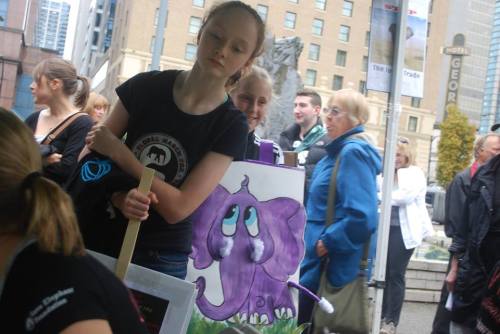 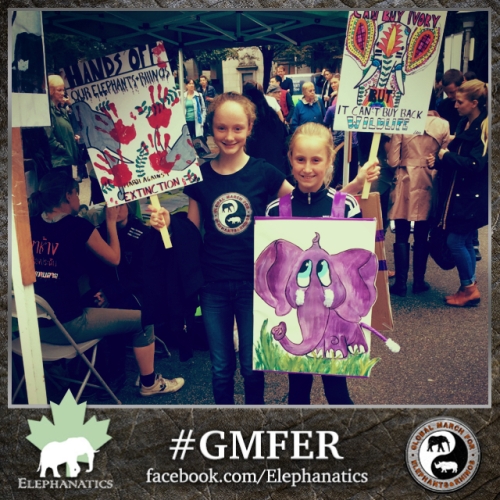 Title: Global March for Elephants and Rhinos in Vancouver on Oct 4th, 2014

The ‘Global Mach for Elephants and Rhinos’ (GMFER) is taking place in downtown Vancouver for the first time on October 4th (1:00 – 3:00 p.m.) on the north side of the Vancouver Art Gallery.

The GMFER hopes to raise awareness about the current unsustainable killing of elephants and rhino for their valuable tusks and horns. The GMFER was initiated in 2013 by the David Sheldrick Wildlife Trust in Kenya.

The illegal wildlife trade is a global problem estimated at USD $20 Billion per annum. Poaching of elephant tusks and rhino horn has been linked to regional instability, organized crime and terrorist networks in Africa.

Elephant tusks are mainly being purchased in China for carvings while rhino horn has been linked to medicinal use in some Asian countries.

A recent study has shown that 100,000 elephants were killed between 2010-2012 and remaining populations are now under threat of extinction.

HRH Duke of Cambridge has said about rhinos: “There are two thousand critically endangered species on the verge of being lost forever. It’s time to choose a side – between the endangered animals and the criminals who kill them for money. I am calling on people all around the world to tell us: whose side are you on?”

The GMFER event will call on governments to publicly destroy their stockpiles of illegal wildlife products, to show “zero tolerance for illegal trading”.

Dr. Jane Goodall has endorsed the GMFER: “We must join forces everywhere to stop the slaughter of elephants and rhinos. They feel pain, they know suffering. We must stop people from buying ivory.”

“Individuals, and society as a whole, can choose to shun ivory, rhino horn, lion and tiger bones as commodities,” say event organizers, “but we need governments to play their part as well, by increasing penalties for bribery, corruption and trafficking offenses.”

In support of the GMFER event, Joanna Lumley, OBE and Fellow of the Royal Geographical Society, says: “If we stand by and watch the brutal extinction of rhino and elephant, the stain of shame on our human consciousness will never be forgiven or forgotten.”

“Endangered leads to Extinction. We must stop the demand for Ivory and Rhino tusks.
Check the products you buy and read your labels carefully, especially Chinese herbal products.
It’s our responsibility to stop what mankind has started,” says Paul Rodgers, well-known singer-songwriter and owner of Willows Animal Sanctuary in Aberdeenshire, who is also in support of the GMFER event.

Invited speakers at this year’s Vancouver event are:

Jake Wall, is a PhD student in the University of British Columbia’s geography department, works for the conservation group Save the Elephants, where he has helped outfit almost 100 of the mammals with GPS satellite-tracking collars. Read more here.

Rosemary Conder, Chief Development Officer for the British Columbia Society for the Prevention of Cruelty to Animals (BC SPCA).

Rosemary  went to Asia in 2011 as a volunteer to help rescued elephants who endured lifetimes of abuse.  The experience showed her the horror these gentle giants face and the impact tourism is having on them.  Elephants have become her friends and teachers. The trip in 2011 to one elephant rescue project became the first of six. Find out more here.

For full details on the Vancouver march click here.

The GMFER will take place rain or shine.

Please help spread the word and join the march on Oct 4th 2014.#March4ElesandRhinos

On October 4, 2014 Vancouver will be taking part in the Global March for Elephants and Rhinos to draw attention to the crisis facing these two species and to call for an end to the ivory and rhino horn trade that is pushing them rapidly towards extinction.

To date, 127 cities across the globe will be marching on that day – this will be the biggest international event ever held to save our planet’s vanishing wildlife, with the focus on elephants and rhinos.

The poaching of elephants and rhinos has reached unprecedented heights in recent years as the demand for ivory and rhino horn has soared in China and other mainly Asian markets. The ivory trade is also fueling terrorist groups, transnational criminal gangs, and armed militias that are destabilizing African countries as well as posing serious threats to international security.

An elephant is brutally killed every 15 minutes – that’s around 100 every day, and at least 35,000 every year. With so few numbers left (some estimates put the figure as low as 250,000 for the entire continent), and with such a slow reproductive cycle, the outlook is looking tragically bleak for elephants. If we don’t take action now to stop this massacre, it will be too late to save them. They will vanish forever – in about 10 years.

A rhino is poached every 11 hours with an estimated 24,000 left in the world. Over 1,000 rhinos were poached last year alone, compared to 13 in 2007. If the rate of killing continues to rise, rhinos too face extinction within the decade.

Here is a short informational video about the ivory trade:
https://www.youtube.com/watch?v=HfooocokOr4&list=UULXXG0683FswkRlXk4CTjFQ

And the elephant advocacy group organizing the Vancouver march,Elephanatics

1:35 to 1:50
Speaker Jake Wall
Jake wall is a PhD student at UBC and an African elephant researcher with Save the Elephants.

1:50 to 2:05
Speaker Rosemary Conder
Rosemary is the Chief Development Officer of the BCSPCA and an elephant advocate, with a particular interest in ethical tourism.

For those of you wanting to purchase t-shirts, mugs etc..please visit here:http://www.cafepress.com/marchforelephantsandrhinos

While we will have some signs to hand out we encourage you to make one at home and bring it along. For ours we used:

foam core to mount the poster on both sides

glue – to glue it all together

Here is some artwork you can use or you can make your own! More to come! 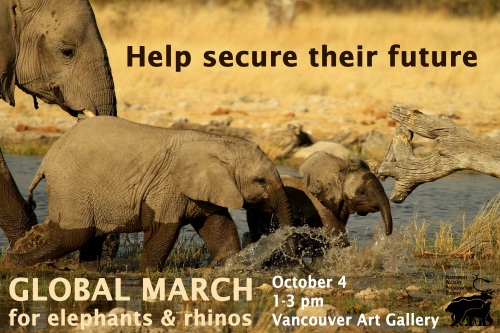 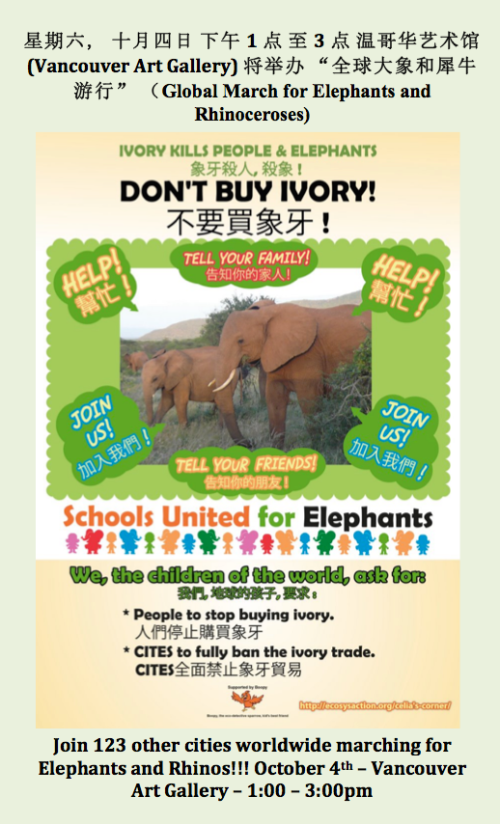 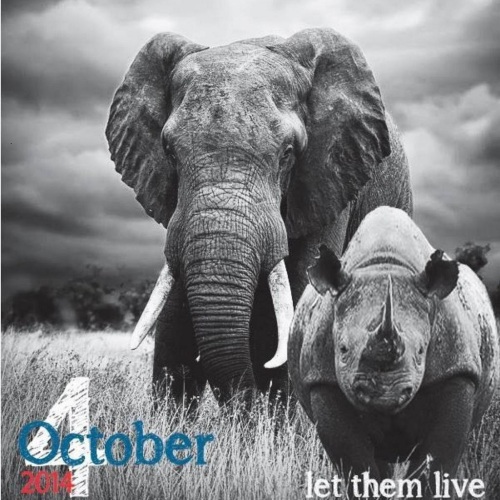 Face painting – We’re super lucky to have someone volunteer to face paint. Here are some fantastic designs to choose from. Elephant Face Paint Designs

Marchers in Israel and London!

Capturing attention and having fun at the same time is important. Here are some examples of other marchers: 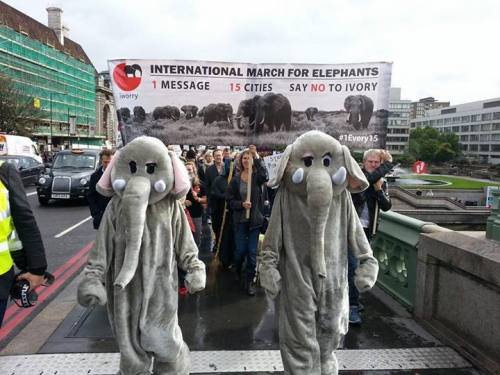 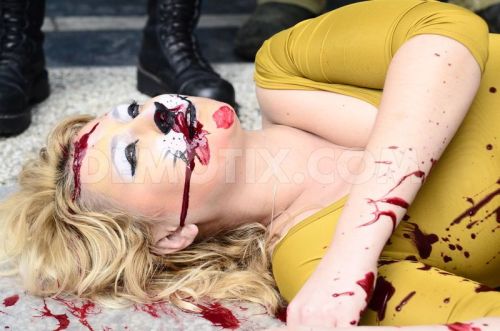 Getting the Word Out

Please help us get the word out. The more people who realize the issues facing these animals, the more of an impact we are able to make on October 4th, the more signatures and MP’s we contact the better the outcome for elephants and rhinos. Let’s make NOISE.

If you have local media, please send them this release:

Please use this poster to publicize the march. Send it to friends and family, post it at your local library coffee shops.

Finalposter – please print or email to your networks.

These smaller promo pieces can be used to hand out to your networks.

Petitions are the life blood of the march. This is how we really make noise. Getting signatures is important. If you can print a copy of this and get signatures and bring it to the march to hand in to organizers that would be amazing and we’ll love you forever.

Petition for parliament-3 – these are signatures to be gathered.

This is a letter we encourage you to send to your MP. All you have to do is add your signature and find your MP through this contact list:

Petition to Parliament Augustt 25-4 – a letter to send to your MP http://www.parl.gc.ca/Parliamentarians/en/members

Petition to China – Stop Carving and other easy but important actions to take:

You can make a difference. Things you can do are:

Tell people about what you know. (See media below and share)

Take what you know and let your government rep know.

Support people working the front lines.You can do this by “liking” these groups on facebook and social media, sharing stories and news, supporting them by supporting their fundraisers – buy t-shirts, adopt orphans as gifts, or fundraise for them. Do NOT support animals in tourism. Elephant rides and treks are  all a part of a system of terrible animal abuse. Tell people. Excellent organizations to support are:

There are more  – but these are just a few.

“”As the dominant species on this planet it is our moral duty to protect and preserve all forms of life. For species such as Elephants and Rhinos to be fighting for their existence due to human exploitation and interference is unacceptable and we must do everything within our power to turn this dire situation around. We are responsible for the problem and we must be held responsible for the solution. It will indeed be a very sad indictment on our species if Rhinos and Elephants are no more, and that day will come sooner than we think if we do not take action.”

Chelsea and Hilary Clinton Call for End to Elephant Poaching

Huffington Post – The Role of Religion in the Elephant Poaching Crisis

Elephants Never Forget, Let’s Not Forget About Them The Globe and Mail August 2014

Don’t let anyone discourage you from social action. Protest, pushing government and organizations to change works but we need to work together, have fun while getting some serious things done. If we don’t do this, these animals can’t save themselves.

The Global March for Elephants and Rhinos October 4th, 2014 has the support of the following NGO’s

Mrs Helen Clark, head of United Nations Development Program for your support and inspiration in a call to action for support of the Global March for Elephants and Rhinos!!!! 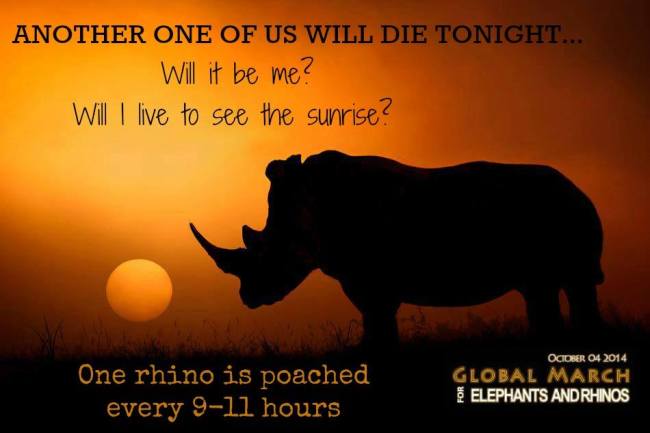 One rhino is killed every 9-11 hours for rhino horn. Please join the Global March for Elephants and Rhinos on Oct 4th to call for an end to the killing and a worldwide ban on ivory and rhino horn before it’s too late. Extinction is forever!

Find cities and learn more on our website at:www.march4elephantsandrhinos.org

See all our posts at a glance at our RebelMouse site:https://www.rebelmouse.com/march4elesandrhinos/

Support us on Thunderclap! http://thndr.it/1ky7VLQ 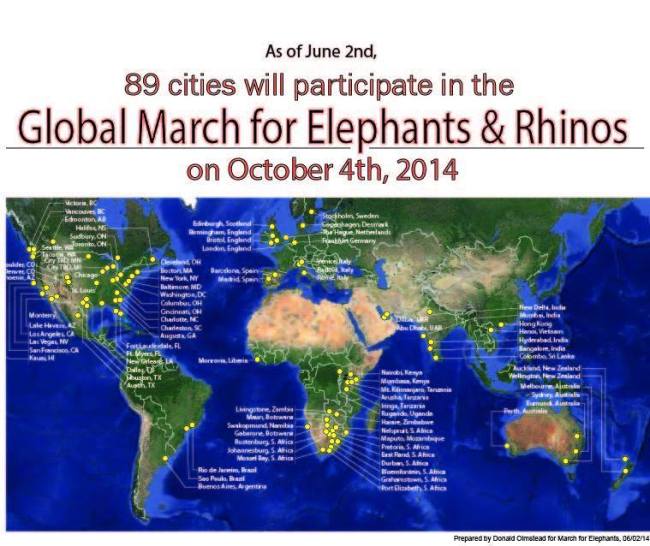 Elephants and rhinos will be extinct in 10 years if poachers and the rhino horn and ivory trade aren’t stopped. More and more people around the world are becoming aware of this problem and are coming together to raise their voices in defense of these animals who are entrenched in a global war on wildlife. Please use your voice and put an end to this. As of June 2nd people in 89 cities around the world are marching to raise awareness to stop wildlife crime of endangered species. Find your city and if you can’t, organize a march in your city. If you’ve never done it before email  me (punkdawgz@gmail.com). Neither have I and we can have fun brainstorming:)

Vancouverites,  your city is here.  The rest of the world your cities can be found here!