2016 Mardi Gras for Elephants and Rhinos: A celebration 4 life

As some of you may know I work to raise awareness of the issues facing the world’s remaining Asian and African elephants. I am part of a group based in Vancouver called Elephanatics. We are a conservation group that does educational outreach, action and advocacy in Canada on behalf of elephants.

For the last two years we have organized a event in Vancouver that is part of a global, grassroots initiative called The Global March for Elephants and Rhinos. Last year over 140 cities organized worldwide. This year we hope to have even more cities participate. Our goal is put continued  pressure on governments and policy makers worldwide to end the ivory and rhino horn trade and to save many of Africa’s endangered species by moving them to Appendix 1 under the convention of the international trade in endangered wildlife and fauna known as CITES.

We are encouraging people in cities around the world to organize events large and small (last year two elderly women organized an event on their street corner which was completely inspiring!)

Without global action elephants and rhinos will be extinction with 10 to 25 years.

On September 24th events will be held worldwide for the opening day of CoP17 in Johannesburg.

Vital decisions on elephants, rhinos and lions are to be made at CoP17 by 181 members of CITES. Our objectives are to halt all trade and to get governments (who are CITES members) to change laws, have political will to stop the trade.

Last year over 50,000 people marched to raise awareness and to demand an end to the poaching crisis that is pushing them rapidly towards extinction.

The poaching of elephants and rhinos has reached unprecedented heights in recent years as the demand for ivory and rhino horn has soared in China and other mainly Asian markets.

Speakers at Vancouver’s events this year are:

Patricia Sims –  Co-Founder of the annual World Elephant Day, a global awareness campaign that brings attention to the critical threats facing elephants. The campaign reaches millions of individuals across the globe through events, traditional media, and social media outreach.
She produced, directed and wrote the documentary When Elephants Were Young,  narrated by William Shatner which won best documentary awards in both the Whistler Film Festival and Palm Springs FF..

Paul Blackthorne is an English Actor for film, television, and radio. He is currently a lead actor in the series “Arrow” which is filmed in Vancouver BC. Over the past three years he has collaborated with different conservation organizations to help raise awareness about the poaching crisis facing the African elephant and the rhino. He has run two successful t-shirt campaigns: One in Vietnam for the rhino with the slogan “Keep Rhinos Horny” and another for the elephant “Poach Eggs Not Elephants”.He is a committed social activist for wildlife conservation and has implemented a range of activities calling for joint global efforts to save wild animals, especially the elephant and rhino.

Mike Farnworth is the current NDP MLA for Port Coquitlam.
He serves as Opposition Spokesperson for Justice (Public Safety and Solicitor General).

Mike has been adamant in trying to fight a loophole in Canadian law that allows rhino horn to be sold if it can be proven to be obtained before 1975. Illegal horn is easily mixed with legal horn and thus forms a loophole. He recently tabled a private members bill at the legislature to outlaw the sale of ivory and rhino horn.
Join us on Twitter: @condofire @elephanaticsBC
Vancity_GlobalMarchElephants Instagram

Here is a short informational video about the ivory trade:
https://www.youtube.com/watch?v=HfooocokOr4&list=UULXXG0683FswkRlXk4CTjFQ 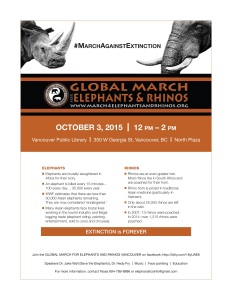 Please help spread the word and join the Global March for Elephants and Rhinos march. Last year 137 cities marched (50,000 people). This year already over 100 cities around the world are organizing to end the poaching war against elephants and rhinos. Find your city here.Learn more about the Global March here.

Vancouver will once again be taking part in the Global March for Elephants and Rhinos to draw attention to the crisis facing these two species and to call for an end to the ivory and rhino horn trade that is pushing them rapidly towards extinction.

The poaching of elephants and rhinos has reached unprecedented heights in recent years as the demand for ivory and rhino horn has soared in China and other mainly Asian markets. The ivory trade is also fueling terrorist groups, transnational criminal gangs, and armed militias that are destabilizing African countries as well as posing serious threats to international security.

An elephant is brutally killed every 15 minutes – that’s around 100 every day, and at least 35,000 every year. With so few numbers left (some estimates put the figure as low as 250,000 for the entire continent), and with such a slow reproductive cycle, the outlook is looking tragically bleak for elephants. If we don’t take action now to stop this massacre, it will be too late to save them. They will vanish forever – in about 10 years.

A rhino is poached every 11 hours with an estimated 24,000 left in the world. Over 1,000 rhinos were poached last year alone, compared to 13 in 2007. If the rate of killing continues to rise, rhinos too face extinction within the decade.

Here is a short informational video about the ivory trade:
https://www.youtube.com/watch?v=HfooocokOr4&list=UULXXG0683FswkRlXk4CTjFQ
Please help spread the word – Join the Vancouver march here! Join the march on FB.

Hosted by elephanatics BC – a  Vancouver based elephant advocacy group

On October 4th 2014 Vancouver will take part in the Global March for Elephants and Rhinos. 130 cities around the world are marching in the biggest demonstration ever to create awareness of the plight of these two species and to demand that governments end the blood ivory and rhino horn trade. This presentation will be shown at the demonstration. Every person who becomes aware and knows about the struggle for survival these species face takes us one step closer to winning the war against extinction. If you can share this with one person you will have helped. Thank you.

Title: Global March for Elephants and Rhinos in Vancouver on Oct 4th, 2014

The ‘Global Mach for Elephants and Rhinos’ (GMFER) is taking place in downtown Vancouver for the first time on October 4th (1:00 – 3:00 p.m.) on the north side of the Vancouver Art Gallery.

The GMFER hopes to raise awareness about the current unsustainable killing of elephants and rhino for their valuable tusks and horns. The GMFER was initiated in 2013 by the David Sheldrick Wildlife Trust in Kenya.

The illegal wildlife trade is a global problem estimated at USD $20 Billion per annum. Poaching of elephant tusks and rhino horn has been linked to regional instability, organized crime and terrorist networks in Africa.

Elephant tusks are mainly being purchased in China for carvings while rhino horn has been linked to medicinal use in some Asian countries.

A recent study has shown that 100,000 elephants were killed between 2010-2012 and remaining populations are now under threat of extinction.

HRH Duke of Cambridge has said about rhinos: “There are two thousand critically endangered species on the verge of being lost forever. It’s time to choose a side – between the endangered animals and the criminals who kill them for money. I am calling on people all around the world to tell us: whose side are you on?”

The GMFER event will call on governments to publicly destroy their stockpiles of illegal wildlife products, to show “zero tolerance for illegal trading”.

Dr. Jane Goodall has endorsed the GMFER: “We must join forces everywhere to stop the slaughter of elephants and rhinos. They feel pain, they know suffering. We must stop people from buying ivory.”

“Individuals, and society as a whole, can choose to shun ivory, rhino horn, lion and tiger bones as commodities,” say event organizers, “but we need governments to play their part as well, by increasing penalties for bribery, corruption and trafficking offenses.”

In support of the GMFER event, Joanna Lumley, OBE and Fellow of the Royal Geographical Society, says: “If we stand by and watch the brutal extinction of rhino and elephant, the stain of shame on our human consciousness will never be forgiven or forgotten.”

“Endangered leads to Extinction. We must stop the demand for Ivory and Rhino tusks.
Check the products you buy and read your labels carefully, especially Chinese herbal products.
It’s our responsibility to stop what mankind has started,” says Paul Rodgers, well-known singer-songwriter and owner of Willows Animal Sanctuary in Aberdeenshire, who is also in support of the GMFER event.

Invited speakers at this year’s Vancouver event are:

Jake Wall, is a PhD student in the University of British Columbia’s geography department, works for the conservation group Save the Elephants, where he has helped outfit almost 100 of the mammals with GPS satellite-tracking collars. Read more here.

Rosemary Conder, Chief Development Officer for the British Columbia Society for the Prevention of Cruelty to Animals (BC SPCA).

Rosemary  went to Asia in 2011 as a volunteer to help rescued elephants who endured lifetimes of abuse.  The experience showed her the horror these gentle giants face and the impact tourism is having on them.  Elephants have become her friends and teachers. The trip in 2011 to one elephant rescue project became the first of six. Find out more here.

For full details on the Vancouver march click here.

The GMFER will take place rain or shine.