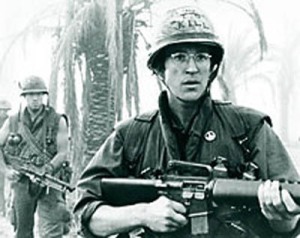 Wow, well my first book after not reading for a year is Michael Herr‘s Dispatches and what a book this is. Michael Herr was a Vietnam war correspondent for Esquire Magazine from 1967 to 1969 and the book is based on his experiences during this time.

John Le Carre called Dispatches “The best book I have ever read on the men and war in our time.” If you’re looking for a political history or a book on war tactics, this is not the book for you. If you’re looking for a book on war – what it looks like to the men who are fighting it and reporting on it – how it changes their DNA -breaks them, alters them, gets under their skin in a way that leaves them fundamentally changed – then this is your book.

What’s even better, is that Michael Herr knows how to write – he delivers sentences that take you to the moral heart centre of war. The first chapter is entitled “Breathing In”, the last is “Breathing Out” in which he describes how men of war reconcile themselves to real life in some way.

“Back in the world now, and a lot of us aren’t making it. The story got old or we got old…We came to fear something more complicated than death, an annihilation less final but more complete, and we got out. Because (more lore) we all knew that if you stayed too long you became one of those poor bastards who had to have a war on all the time and where was that?”

But long before you get to this point he makes you familiar with the newness, then the oldness and then the horror of some kinds of deaths, the loneliness, the function and dysfunction, the fucked-upness, the innocence, the bravery and the not-so-brave, the friendships, the love, and yes, the glamour of war and how seductive and life changing it is. “I think that Vietnam is what we had instead of happy childhoods.” Well how crazy is that, but somehow by the end of this book you get it.

This book was written a long time ago – but it’s as relevant today as it was thirty years ago because for some reason we can’t seem to stop fighting stupid wars and a whole new generation of men and women are survivors of this kind of terrible glamour.