Tag Archives: Say NO to ivory

These skills and Daphne’s knowledge have continued to develop over the years and been shared with keepers at the charity’s orphanage in Nairobi. To date, more than 140 elephant orphans have been successfully rehabilitated, all will eventually return to the wild where they belong.

This film provides an insight into what it is to be an orphan elephant rescued by the DSWT.

iWorry campaign #1Every15 Minutes is Killed for the Ivory Trade 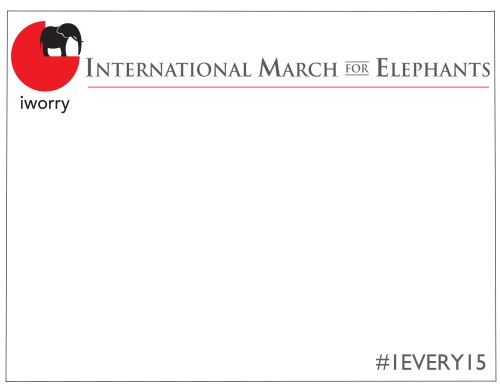 oin us for the iworry International March for Elephants on Friday October 4th.

Last year up to 36,000 elephants were killed for their ivory. 1 life lost every 15 minutes.
At the current rate of poaching African Elephants could face extinction in the wild by 2025.

Join us as we peacefully march in 15 cities around the world on Friday 4th October.
You can also show your support by joining the digital march for elephants.

Support the DSWT’s iworry campaign and be a part of a global effort to protect and preserve elephants.

The iworry campaign was created by The David Sheldrick Wildlife Trust (DSWT) and exists to raise global awareness to the devastating impact the illegal ivory trade is having on elephant populations. Launched in September 2012, the campaign has attracted worldwide backing calling for a complete ban on the illegal trade in ivory.

As a field based organisation, the DSWT works on the front line to protect wildlife and prevent the suffering and killing of wild animals. Recognising the need for greater global awareness of the illegal wildlife trade in ivory, which is claiming the lives of 36,000 elephants annually, the DSWT launched iworry in 2012. The campaign is based on the premise that everyone has a stake in conserving elephants and that we must come together if we are to successfully educate and inform people as to the existence of the illegal ivory trade, the devastating toll it is having on elephant populations and through that, call on governments from around the world to take proactive steps to tackle this illicit trade and save elephants.

Sharing the evidence of poaching witnessed by DSWT teams in the field, iworry utilises social media, petitions, imagery, the press and public marches to create an awareness of the existence of the ivory trade and its impacts. The loss of elephants in the wild, an iconic, intelligent and social species, would not only make the world a lesser place, it would have serious environmental and economic repercussions. The iworry campaign calls on world governments to make the illicit ivory trade and wildlife crime a priority issue, to make a financial commitment to security enforcement and to impose a complete ban on all ivory sales.

The International March for Elephants has been organised by The David Sheldrick Wildlife Trust (DSWT) through their iworry campaign and will be taking place in 15 cities across the globe in the single largest demonstration of awareness for the species.

The ivory trade is an international problem and one which must be recognized by Governments worldwide if we are to see any changes.

Join your local city March and stand in solidarity with elephants.

Sign up to one of our fifteen official marches:

*Please note – due to recent events which took place in Nairobi from 21/09 – 24/09 we have decided to cancel the International March for Elephants in Nairobi. We will hold a vigil for those who so tragically lost their lives in the attacks and also for the elephants who continue to fall victim to the ivory trade. This will be held on the day of the March October 4th at the Nairobi Nursery. More info at: http://www.dswt.org

The peaceful marches will be concluding at Government Buildings where we will hand over a letter carrying the voice of thousands of people, calling for stricter penalties and urgent global change.

Email us to register if you are not a Facebook user.

For those who are attending the march and would like to bring along your own placard, we advise that these are produced A1/A2 size with the following phrases:

‘Say NO to ivory’
‘Stop the ivory trade. Save the elephant’
‘Elephant Extinction 2025 – Not on our watch’
‘Join the fight to Save Elephants iworry.org’

We do not condone any offensive text and/or imagery on any placards. This is a peaceful march and all aspects will reflect this.

Tagged as animal rights, anti-poaching, Elephant Extinction 2025 – Not on our watch', iWorry Campaign, Join the fight to Save Elephants iworry.org', Say NO to ivory, Stop the ivory trade. Save the elephant, stop the slaughter of elephants, The David Sheldrick Wildlife Trust, The International March for Elephants