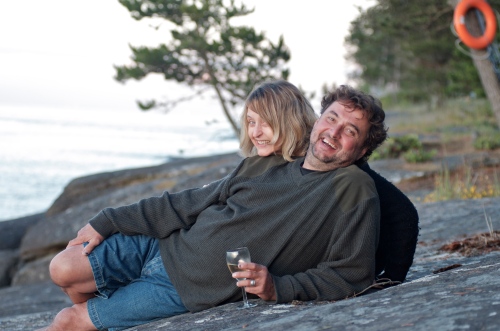 I had been counting down the days at work. “One more month.” I would scream from my office. “Two and half weeks.  That’s 14 phone calls and several texts.” “Guess what? Now 19 more hours.”  “Until what?” they finally asked. “Until my brother and his wife come.” “That’s it?”they asked. “Yes, that’s it.” “Awww.” I heard my one co-worker say. I couldn’t tell if he was charmed or disturbed. But my excitement was (is real). You see, my brother and his family live on the other side of the country. And even though we manage to talk a few times a week, the day to day living that closely knits relationships together is absent.

And I feel that absence. I always have even though I chose to live on the opposite side of the country. It’s what I refer to as the ‘hole’ in my existence. But we work hard at knitting closeness over distance. And it is ok because we have a natural affinity for closeness. For the knowingness of each other – our foibles, our loves, our idiosyncrasies – how each of us is a part of the other – in looks – in memory – in tastes – in family culture. It’s like fitting into a puzzle.

It’s fair to say that my anticipation is equal to the sadness I know I will feel when it all ends. On the first day of our visit we went to a pub and Dave was explaining that I was already incredibly sad at having to say goodbye – at which my sister-in-law exclaimed ‘No?!” (likely with some alarm). And like an actress on set, I said “YES” and the inevitable march towards tears began as if on cue. But I managed to stop (mainly because I was told to:) but also because I didn’t want to ruin the vacation by not completely enjoying the moment – the kind of moment I wish I could have much more of.

That was the start of a two week vacation that melted the years and the distance away. Great friendships with brothers and old girlfriends (my brother married my best friend from high school) don’t fade away. They just need to be tended to once in awhile. And that’s what we did. We laughed, sang, (drank), danced our asses off, napped, read, ate like kings, giggled and took everything that life had to offer.

Was I sad when my brother and Alison left? Yes. Did I cry? Yes. But something happened that I didn’t expect. And that is that our visit made me feel hopeful – like the four of us have many more adventures in us and for that I am thankful.

The fine picture attached was taken by Dave who caught almost all of the best moments with his incredible eye for life.