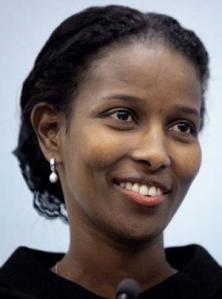 I hadn’t intended to read Infidel. It was a book on a way to another book and also I am rarely  able to make my way through non-fiction. This book, however, was an exception in spite of the fact that I didn’t find the writing to be that great. Ayaan Hirsi Ali’s life story, on the other hand, is interesting and so foreign to any life story I know that once I picked it up, I couldn’t put it down.

Ayaan Hirsi Ali is perhaps better known as the outspoken Dutch parliamentarian and women’s rights activist who collaborated on a film with Theo Van Gogh that highlighted the abuses of Islam against Muslim women. Van Gogh was murdered and found with a note pinned to his chest saying Ali would be next.

Infidel is a memoir of her life growing up in Somalia and Kenya where she was regularly beaten by her mother, abandoned by her father and eventually promised in marriage to a man she didn’t know. She escaped to Holland where she sought refugee status, worked as a translator in abortion and women’s clinics and ultimately went to university to study politics.

It is through her ‘awakening’ in Holland to western values of equality, government, marriage, self-determination and women’s rights and her work in the clinics that drives her to fight for the rights, particularly of immigrant women in Holland. She is shocked when she learns of the sexual excision of young girls and honour deaths in her newly adopted country. But her desire to open dialogue on these issues spawns a hostility that forces her to live under guard 24 hours a day under threat of death.

This is one of those books that rips you out of your western centric comfort zone and forces you to see that the world is an entirely different place for many people but particularly for many women the world over. She obviously has a very strong view on arranged marriage, the role of women within Islam and the ability for Islam to adapt to allow women an equal role and self-determination. I don’t know enough about this part of the world to exercise any kind of opinion but I can say that the dynamics in her life story are overwhelmingly paternalistic. The quality of your life depends on the good will of almost everyone around you.

That she managed to break the mold and re-invent herself as a feminist and atheist seems shocking to me given her background. She talks about the influence of reading romance novels at a young age. She would often compare her girlfriend’s experiences with marriage to these fantasies and was determined to seek a different kind of life for herself.

I think she is a brave woman. She has guts, stamina and a burning drive to make the world a better place for women.The book, for me, was a bit depressing though. If nothing else it underlined the enormous chasm between the West and Islam and given the world’s circumstances it makes me feel less hopeful that a bridge can be created between these worlds. Maybe this is a simple view but towards the end of the book when she essentially had to leave Holland because of her public outspokeness,  I felt outraged and sad (maybe sadder than usual) about the crappy world we live in.